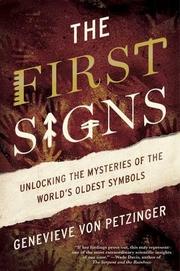 A young scholar brings fresh eyes and fascinating theses to the study of ancient rock art.

Over the last few years, Canadian archaeologist von Petzinger has been stirring up interest—and a little controversy, in some circles—with her theories about geometric figures in Ice Age art. As she writes in this lively introduction to her corner of prehistory, that body of art contains a graphic inventory comprising 32 figures: dots, exes, rectangles, chevrons, crosses, circles, and other symbols that don’t quite add up to an alphabet but point the way toward such a system of notation, “opening the door for the later invention of complex graphic systems.” By her account, nearly two-thirds of these figures are found in the earliest Aurignacian sites, strongly arguing for a “symbolic tradition [that] appears to have arisen in Africa long before the first groups of migrants left to populate the Old World.” The arrival of these peoples in Europe 40,000 years ago brought these ancient symbols into new territory, some of which was occupied by other hominid tribes. As the author notes, we can only guess at what the symbols mean. Given that the same signs were used over a period of 30,000 years throughout Europe, she finds it likely that their meaning shifted over time and in different places, in the same way that spoken languages change. Linking these systems to other graphic conventions may eventually yield some sort of Rosetta stone, but von Petzinger is careful not to be overly speculative. Indeed, some lay readers may find her approach to be too cautious. Still, scholars and amateurs alike should perk up at her thought that these ancestral peoples did not confine their painting to the deep interiors of caves but likely decorated many easier-to-reach surfaces with self-expression, giving birth to public art as well as writing.

Anyone who’s longed to visit Lascaux or the caves of Cantabria will be eager to read von Petzinger’s admirable efforts at cracking the code.