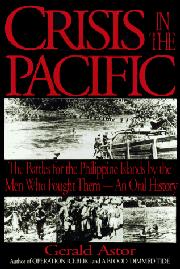 CRISIS IN THE PACIFIC

The Battles for the Philippine Islands by the Men Who Fought Them--An Oral History
by Gerald Astor
BUY NOW FROM
AMAZON
BARNES & NOBLE
GET WEEKLY BOOK RECOMMENDATIONS:

 Astor (Operation Iceberg, 1995, etc.) has garnered extensive testimony from veterans of the bloody struggles for the Philippines, a strategic prize in WW II. Drawing on these powerful first-person accounts, Astor argues that the US suffered a ``second Pearl Harbor'' in the Philippine Islands during December 1941. The Filipino- American defenses were shockingly unprepared, despite General Douglas MacArthur's warnings of imminent attack. American forces had obsolete tanks, guns, and planes, and no reserves of ammunition. Despite these handicaps, many US units and the gallant and highly professional Filipino scouts fought bravely against veteran Japanese troops. Hungry, racked by disease, despairing, they fought on. Astor vividly depicts the fall of Bataan and Corregidor, the infamous Death March (during which many American POWS were murdered), and the atrocities carried out by the Japanese against Filipino civilians. (At the postwar trials of Japanese officers it was asserted that 131,028 Filipions and Americans were murdered during the Japanese occupation.) Astor is critical of MacArthur's misleading and self-serving reports about the Japanese invasion and of his false promises of reinforcements to his troops and their allies. The American return to the islands in 1944 was a different story: The avenging Allies came with overwhelming land, sea, and air power. Despite that, it was a long, brutal campaign. Judging from these stirring accounts by the men in combat, the Allied infantrymen and airmen and the Scouts (Filipino-American guerrillas) were truly heroes. MacArthur ultimately redeemed himself, returning to the Philippines, ousting an entrenched enemy, and earning a great victory under trying circumstances. Astor's latest contribution to the literature of WW II pays tribute to the little-known exploits, the sacrifices, and the valor of fighting men and reminds us that those who defend freedom may incur a terrible cost.

THE RIGHT TO FIGHT
by Gerald Astor
Nonfiction