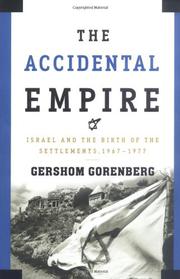 Israel and the Birth of the Settlements, 1967-1977
by Gershom Gorenberg
BUY NOW FROM
AMAZON
BARNES & NOBLE
GET WEEKLY BOOK RECOMMENDATIONS:

Of hard choices and strange bedfellows: an illuminating account of a current controversy that extends back many years, namely, Israeli settlements beyond the bounds of Israel.

Well before there was an Israel, writes Jerusalem Report editor Gorenberg (The End of Days, 2000), there was a strong back-to-the-promised-land movement that urged that Jews “should return not only to the homeland, but to land itself, to the earth.” Leftist and even communist, this movement resulted in an unintended perimeter of kibbutzes that bore the first shock of attacks in a series of wars. When, in 1967, Israel acquired a comparatively vast expanse of territory from Egypt, Jordan and Syria, Defense Minister Moshe Dayan formulated a policy of “invisible rule,” though there was no mistaking just who ruled the conquered lands. In time, some members of Dayan’s circle alternately proposed giving the Gaza Strip back to Egypt and jointly ruling the West Bank with Jordan. Such magnanimity fell by the wayside with the massive sneak attack that was the Yom Kippur War of 1973, when Israel lost 2,656 soldiers in 19 days—the equivalent, Gorenberg points out, of a loss of 165,000 Americans in the same period. Determined not to be caught short again, Israel established defensive positions that threaded through Arab territories, occupying the high ground and joined by roads that bypassed Arab towns and villages entirely; Gaza was effectively cordoned off, while Israeli civilian settlements punctuated occupied territory precisely “to prevent the creation of a Palestinian state.” This development was spearheaded by some of the same leftist kibbutzim, though now allied with members of the religious right whose stock rose through the 1970s, culminating in the Likud victory of 1977—another unintended consequence, but one that has conditioned Israeli politics to this day.

Thus, Gorenberg writes, the accidental empire. An exemplary history of a phenomenon that is still unfolding—for, as Ariel Sharon once urged, “Everything we don’t grab will be in their hands.”

THE UNMAKING OF ISRAEL
by Gershom Gorenberg
Nonfiction

THE END OF DAYS
by Gershom Gorenberg

HOW LONG WILL ISRAEL SURVIVE?
by Gregg Carlstrom
Nonfiction