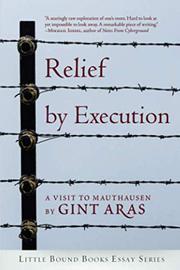 Aras’ (The Fugue, 2015, etc.) memoir recounts a tumultuous childhood and an emotional visit to an Austrian concentration camp as an adult.

The author was born in Cicero, Illinois, in 1973, a “rusted manufacturing town” that borders Chicago’s West Side, where, he says, violence was accepted as a part of ordinary life. His parents were Lithuanian refugees who’d fled Soviet occupation in 1945 and were drawn to Cicero because of its Lithuanian community and its Catholic parish. There, Aras suffered terribly under the violent despotism of his father, he says, which would haunt him well into adult life. The author realized that the account of Lithuanian history that his family taught him was a heavily “edited,” anti-Semitic one, and that, by extension, his own identity “seemed concocted, with most adults I knew participating in its composition.” He later moved to Linz, Austria, and took a job as a teaching assistant, and lived there for three years. But he couldn’t make himself visit the Mauthausen Concentration Camp Memorial—a conspicuous reluctance that the author mines with impressive, introspective depth: “I had learned I had the consciousness of the victim and the perpetrator inside me all at once, and my suffering was the result of a war between them….I had avoided concentration camps because…I feared they’d offer one of these shades the opportunity to win out.” Aras’s remembrance is as philosophically moving as it is brief—fewer than 100 pages. Despite its brevity, the memoir’s confessional candor is profoundly affecting as Aras plumbs the depths of his tortured mind with great sensitivity and humility, as when, early on, he notes how the town of Cicero inspired a “conflicted sense of fear, sadness, concern, and bewilderment” in him. The memoir is part of the Little Bound Book Essay Series; it’s small in size—just 4 by 6 inches—and adorned with a few melancholic black-and-white photographs.

A thoughtful meditation on the painful process of self-knowledge.