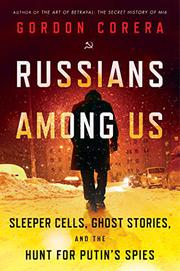 An eye-opening look at the “illegals” and other agents who have been spying for Russia, Soviet and otherwise, over the last several decades in the West.

BBC security correspondent Corera tells a big story in a relatively short space. He opens with a cast of Russian spies trained by the KGB in the latter days of the Soviet Union. “Donald Heathfield…had been born in a cemetery, a ghost rising from the dead,” the author writes of spy Andrey Bezrukov, who took over the identity of a Canadian baby who had died shortly after being born. Each “illegal,” who lived an ordinary life in the West, was a tremendous investment in time and money, with far longer and more extensive training, by Corera’s reckoning, than that of the average CIA or MI6 agent. The great fear was that they would “go native,” finding life in the West more attractive than in the motherland. Then came the collapse of the Soviet Union, and the old ways seemed quaint and genteel in the eyes of the new apparatchiks under Vladimir Putin, himself a one-time KGB agent (though not much of one, Corera suggests). That new generation of the FSB, the successor to the KGB, angry that their elders had lost the Cold War, “were determined to restore Russian pride, and they would take the fight to their enemy.” They did, in elaborate games of cat and mouse, with seductive women who nearly snared an Obama Cabinet member in a “honey trap” and with operatives who barely bothered to disguise their identities. One of the latter was Maria Butina. “The information she provided,” writes the author, “was of ‘substantial value,’ and the Russian intelligence services would be able to use it for years to come to identify and target those who might be susceptible to recruitment by trained intelligence officers, according to a former FBI official’s declaration.” The spy ring was eventually broken, mostly thanks to betrayal on the part of Russian insiders rather than homegrown sleuthing.

A book that helps make sense of recent headlines and old news alike.

THE ART OF BETRAYAL
by Gordon Corera
Newsletter sign-up