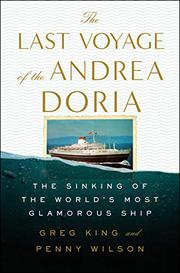 THE LAST VOYAGE OF THE ANDREA DORIA

The history of an infamous shipwreck.

In 1956, in dense fog, the Italian ship Andrea Doria sank off the coast of Nantucket, within miles of its destination at the port of New York. King and Wilson (Twilight of Empire: The Tragedy of Mayerling and the End of the Habsburgs, 2017, etc.) bring to their brisk, vivid narrative the prodigious research that marked their history of another maritime disaster, Lusitania (2015). But where the 1915 attack on a British liner by a German U-boat, killing all aboard, affected international hostilities, the sinking of the Andrea Doria did not even dent the fortunes of the liner industry. Most passengers and crew were rescued; later, many took other ocean voyages. Nor did the ship itself, which boasted beauty, modernity, and a special brand of Italian glamour, have the significance of the Titanic, which seemed a microcosm of social strata and aristocratic hubris. Passengers on the Andrea Doria included a few hugely wealthy Americans, traveling first class, returning from extended European holidays, while some Italians who boarded in Naples found themselves in claustrophobic accommodations. Most, though, were simply well-off. There were several clergymen and two actresses, one the wife of Cary Grant. The authors offer lively biographies of select passengers and crew, setting the stage for the drama that occurred at 11:11 p.m. on July 25, 1956, when the Swedish liner Stockholm, with an inexperienced seaman at its helm, smashed into the Andrea Doria’s starboard side, “demolishing all in its path” and causing “a horrible cacophony of death and destruction.” The authors masterfully evoke the anguish that ensued as passengers—panicked parents and frightened children, among them—crawled across the dangerously listing ship and perilously descended into lifeboats. Within hours, several rescue vessels arrived, including another luxury liner. The authors’ recounting of the aftermath of the disaster—investigation, litigation, and the lives of many survivors—though informative, seems anticlimactic in comparison to the tense drama of the event.

An assured, absorbing history of a disaster.

THE ASSASSINATION OF THE ARCHDUKE
by Greg King
Nonfiction

SHARON TATE AND THE MANSON MURDERS
by Greg King