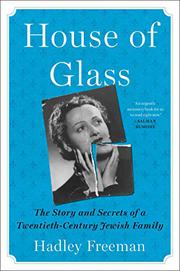 Going through her late grandmother’s closet yielded discoveries in a shoebox that propelled the author on a decadeslong pursuit through her family’s history before, during, and after the Holocaust.

Guardian columnist Freeman (Life Moves Pretty Fast: The Lessons We Learned From Eighties Movies (and Why We Don't Learn Them From Movies Anymore), 2016, etc.) returns with a highly personal, thoroughly and lovingly researched tale of her family. The members of the family Ghlas (the spelling then) fled when the Nazis began to sweep through Eastern Europe; they settled in France, thinking they were safe. They weren’t. One sister escaped to America, but the rest remained; some hid, and some were arrested (one died in Auschwitz). All were in deadly danger. To conduct her impressive research, the author traveled everywhere relevant: former homes, prison camps, and homes of survivors who could add to the stories. Along the way, Freeman discovered many remarkable things about her grandmother’s generation. One sibling became a noted fashion designer; another pioneered the use of microfilm; another (the one who fled to America) married an American and never got to realize her dream of returning to live in France. Throughout, the author provides thrilling tales of escape, near misses, arrests, deportations, resistance, and betrayals. After the war, members of the family stayed in France but never forgot the way some of their French neighbors had eagerly denounced Jews to the Nazis. Freeman made a host of other astonishing discoveries: One sibling became friends with Chagall and Picasso; the microfilm sibling made a fortune. Freeman’s technique is chronological, as she follows one sibling and then shifts to another, which allows readers to learn all the stories. All are gone now—Freeman includes a poignant chapter about the death of each—and she concludes with stories (including her own) about the subsequent generations.