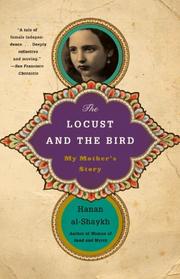 THE LOCUST AND THE BIRD

The memoir of Kamila, a Lebanese Muslim woman whose novelist daughter (Only in London, 2001, etc.) takes on the voice of her mother to tell her story.

Al-Shakyh begins in 1932, when her unschooled mother was also seven, living in poverty in a village outside Beirut. After she moved to Beirut to live with extended family, Kamila, whose views of life were shaped by romantic movies, fell in love with 17-year-old Muhammad. Forced at age 14 to marry her widowed, much older brother-in-law, she had her first child at 15 and her second (the author) three years later. Older family members took care of her children while the pretty, cunning Kamila stole money from her husband, mocked him at prayer and carried on an affair with Muhammad. Eventually she divorced, leaving her children behind, and married her lover. Marriage to Muhammad, however, was far from romantic, and she was soon overwhelmed by the responsibilities of running a household and exhausted by multiple pregnancies. Muhammad’s accidental death left her a widow at age 34 with five children to support. Especially vulnerable because she was a woman who could neither read nor write, Kamila somehow kept her family together, though the details are vague. She evaded or conned creditors and surrounded herself with women who gave each other moral support. The author tells less about the later years of her mother’s life, part of which she spent with family in Kuwait and later San Diego, where she appears as an unhappy, isolated woman and an interfering mother-in-law. The author returns to her own voice to end her mother’s story in Beirut, where Kamila died in 2001. The picture that emerges of a devious woman struggling to make her way in a rigid, male-dominated society is clear, but the prose is often trite and the chronology murky. A dramatis personae and occasional footnotes aid readers unfamiliar with Lebanese history or Muslim culture.

An unflattering portrait, perhaps exacerbated by an infelicitous translation.

ONE THOUSAND AND ONE NIGHTS
by Hanan al-Shaykh
Fiction

ONLY IN LONDON
by Hanan al-Shaykh
Fiction

I SWEEP THE SUN OFF ROOFTOPS
by Hanan al-Shaykh
Fiction

THE STORY OF ZAHRA
by Hanan al-Shaykh
Newsletter sign-up