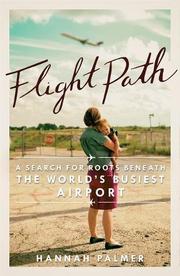 A young writer retraces her search for former homes lost to a unique form of urban sprawl.

In her debut memoir, Palmer, an Atlanta-based urban designer with an MFA in creative writing, returns to her Georgia roots to explore what remains of the houses of her youth. Daphne du Maurier’s famous line from Rebecca, “we can never go back again, that much is certain,” takes on literal weight here as the author discovers that all three of her family homes were swallowed up by the encroachment of Atlanta’s Hartsfield-Jackson International Airport. It is considered the world’s busiest airport; the author reports that in 2014, Hartsfield-Jackson “averaged a quarter million passengers each day, roughly 2,500 daily arrivals and departures…something like three flights per minute.” In 1961, Atlanta opened the biggest passenger terminal in the country, and, at that time, the airport boasted the familiar “giant ‘X’ ” configuration of two runways that “could not be duplicated or extended.” When the airport soon became overcrowded, a new master plan scrapped the conventional “criss-cross runways” and “starfish-shaped” terminal for a “series of parallel east/west runways” and linear terminals that increased the land area “fivefold,” leading to its present-day 4,700-acre footprint. Arguing that “everyone uses the airport,” but “no one sees it,” on her return to Atlanta, Palmer originally thought the disappearance of one of the communities she grew up in had something to do with gentrification, where socio-economics or “racial anxiety” played into the desire of certain citizens to be “ ‘comfortably south’ of people that didn’t look like them.” But the more she researched the town’s decline and fall, the more she realized the airport’s flight path had “carved an invisible freeway over Forest Park.” Throughout, Palmer’s clear, engaging prose effectively combines her private-eye–like adventures with emotional discoveries made as she comes to terms with moments and structures erased from her past.

A thoughtful, eclectic account of what infrastructure progress can leave in its wake.

WHERE WE WANT TO LIVE
by Ryan Gravel
Nonfiction

CITY ON THE VERGE
by Mark Pendergrast
Nonfiction

THE HARD WAY ON PURPOSE
by David Giffels
Nonfiction

ECOLOGY OF A CRACKER CHILDHOOD
by Janisse Ray
Newsletter sign-up