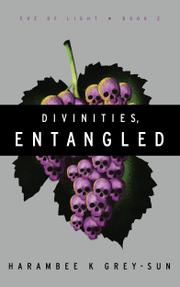 Author Grey-Sun launched his visionary Eve of Light sci-fi series with Broken Angels (2012), to which this is a sequel. Hallucinatory, nightmarish yet weirdly beautiful, this volume is a mind-spinner even for readers who grokked the complex back story established in the first volume. Under an unpopular female president, near-future America is a decaying surveillance state, with ghastly acts of mayhem and anarchy broadcast online, typically by damaged packs of unwanted or exploited juveniles. A game-changer in this dystopia is the sexually transmitted White-Fire Virus, a closely guarded government secret that grants its victims altered consciousnesses—including criminal insanity—and superhuman abilities, like casting illusions and invisibility. Many White-Fire Virus carriers consider themselves to be angels, either trying to save the world or hasten its end. Trying to save it is Robert, an undercover agent and virus carrier who survived the traumatic events in Broken Angels with Ava, a beautiful religious zealot (and “born-again virgin”) suffering partial amnesia. Robert knows she’s a sleeper agent or hypnotized cult terrorist, primed for a trigger signal that will fulfill some ominous mission. Various confrontations tend to make the exposition a bit tangled, as Robert’s secret-ops organization waits for Ava to reveal her true nature, and Robert and Ava must make a pilgrimage to XynKroma, a dimension of “polluted light,” described as the last mad thoughts of a dying God, where sinister entities are preparing to take over once earthly reality checks out. Grey-Sun’s rococo mythology embraces gnosticism, Armageddon, philosophy, magic, poetic wordplay (which, readers are told, is also magic) and anger over the plight of at-risk children. It’s no easy task to comprehend all the swirling events, including the abrupt reintroduction of a few key characters from Broken Angels. Readers will need to do their homework.

Intrepid readers will enjoy this ride, however puzzling, through the fever-dream sequel to a metaphysical action-adventure.

STATE OF BEING
by Sven Michael Davison
Fiction