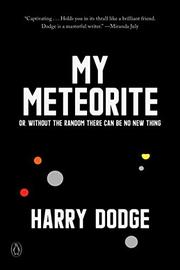 Or, Without the Random There Can Be No New Thing
by Harry Dodge
BUY NOW FROM
AMAZON
BARNES & NOBLE
LOCAL BOOKSELLER
GET WEEKLY BOOK RECOMMENDATIONS:

A memoir from the acclaimed writer and visual artist.

Guggenheim fellow Dodge is a well-known artist whose work has been exhibited at the Museum of Modern Art and the Museum of Contemporary Art in Los Angeles, among other venues around the world. For literary sorts, however, he may be best known as the singular presence in his partner Maggie Nelson’s inventive memoir The Argonauts, which described the relationship between two incredible artistic creators. Dodge’s memoir is in no way linear, which may make it difficult to work through for some readers, and there’s little context to the material. The book, he writes, “was drafted, in large part, using unaugmented recollection as a primary source; some of the resulting inaccuracies have been purposefully left uncorrected.” Throughout, the author discusses Nelson and her book and provides affectionate passages about their children. The narrative, presented in clipped entries that don’t always cohere, jumps decades among the late 1970s and the present. One of the main themes is death, as Dodge considers the passing of his parents (“the place where my mom died was a nightmare. It was industrial dying, industrial death”), but there’s also plenty of existential trivia, with long, considered opinions on movies like Blade Runner, Arrival, and arcane films from the past. Dodge displays a wildly creative voice, opining on the remarkability of coincidence, the nature of individual intelligence, and the titular meteorite at the center of the narrative, which the author seems alternatively obsessed with and horrified by, depending on the moment. Ultimately, the text reads like a diary, compelling yet fragmentary confessions that might concern children at one moment and graphic, anonymous sex in another. Readers who like the voice will find plenty of intriguing bits about movies, books, and a somewhat psychedelic visit to Six Flags, but strangers will be wandering into unknown territory.

Enlightening insight into a creative mind that may stifle some readers but that adds further mystique to a unique persona.