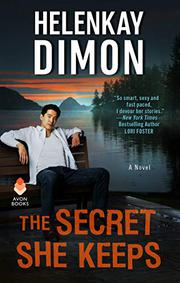 THE SECRET SHE KEEPS

Secluded Whitaker Island faces a crime spree when Connor Rye comes for a vacation, but when an enigmatic beauty is in danger, he’ll risk anything to keep her safe.

Needing a break, Connor follows his brother Hansen’s footsteps to secluded Whitaker Island, but the night he arrives he’s attacked by someone in his pitch-dark cottage and warned to leave. He’s surprised to learn that a mysterious woman named Maddie Rhine, who answers the phone for the police department, is responsible, and they have an unorthodox meet-cute when the local police chief, Ben Clifford, makes Maddie confess to Connor. She tells him that she thought he was breaking into the cabin, but that's not true—she had been counting on having that cabin empty in case she needed to use it as a hideout since she had just gotten a threatening note saying "I found you, bitch." The notes escalate and seem to threaten Connor as well. Connor and Maddie find themselves increasingly attracted to each other, and Connor becomes Maddie’s fiercest protector; meanwhile, Ben becomes more concerned that Maddie’s past is coming back to haunt her. It turns out that Maddie used to be in the witness protection program. When a body turns up on the island and her old WITSEC handler follows, Maddie begins to think it may be time to run again, but she’d left WITSEC because she wanted a life—“Not her old one, but a life”—and now she finally feels like she’s getting there and may have met her perfect match. Yet even as she and Connor are contending with a dangerous enemy, they’re also navigating deep emotional wounds, and surviving physically might be less challenging than overcoming past traumas through honesty and vulnerability. Dimon’s second Whitaker Island–set romantic suspense once again plays up the remote location populated by a community full of secrets and fueled by gossip. Calm, capable Connor (brother of Hansen from Her Other Secret, 2019) is the perfect partner for rattled Maddie, and their journey to happiness is smart and satisfying, though slightly marred by a villain with hazily defined motivations.

HER OTHER SECRET
by HelenKay Dimon
Fiction

THE PRETENDER
by HelenKay Dimon
Fiction

UNDER THE WIRE
by HelenKay Dimon
Fiction

I AM JUSTICE
by Diana Muñoz Stewart
Fiction