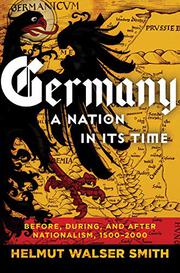 A Nation in Its Time: Before, During, and After Nationalism, 1500-2000
by Helmut Walser Smith
BUY NOW FROM
AMAZON
GET WEEKLY BOOK RECOMMENDATIONS:

A noted historian outlines the development of the German nation in novel ways.

Smith (History/Vanderbilt Univ.; German Nationalism and Religious Conflict: Culture, Ideology, Politics, 1870-1914, 2016, etc.) begins his account in 1500, when there was no Germany as such but instead a collection of cities and mostly small principalities: “No charts drew the German lands to scale and no drawings showed its borders. And no one had described Germany as a space with a recognizable shape.” Modern cartography would change this, marking German itineraries and linking German-speaking cities into a “Germania” that “was an act of discovery, not chauvinism.” However, chauvinism would soon follow: Martin Luther railed that the humanism of mapmakers and scholars had “Judaizing tendencies” that yielded too much to “the enemies of Christ.” In time, nationalism would replace the former German devotion to hometowns, and it found expression in the depopulating Thirty Years’ War, which took decades to recover from. On that note, Smith writes, although millions of Germans lost their lives during the Hitler years, recovery was swift—and although a majority of Germans believed, just after the war ended, that national socialism was a meritorious system whose leaders had merely taken a few missteps, by the time the “economic miracle” was at work in full force, most conversely saw that Hitler had been ruinous. German nationalism today is a very different thing from its manifestations in the two centuries prior. Smith writes of a crowd of soccer fans cheering for their team against Portugal during the 2006 World Cup and finally feeling comfortable enough about being German to wave their national flag. Even though Germans are now resolute internationalists, Smith concludes, there are troubling rumblings of a reborn nationalism in opposition to the German government’s comparatively open-door policy toward immigrants and refugees, so that “public discourse now seems increasingly rife with prejudice toward outsiders.”

Fruitful reading for students of modern European history and the rise of nationalism.