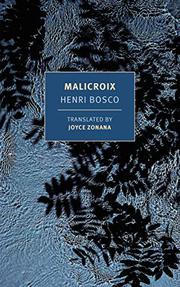 A young man travels to a remote island to claim his inheritance.

Martial Mégremut can trace his heritage to two families: the gentle, even placid Mégremuts, whose name he bears, and the mysteriously wild Malicroix. When he hears that his great uncle, Cornélius de Malicroix, whom he has never met, has not only died, but also left him a small inheritance, he is intrigued: This Malicroix lived for more than a decade on a small island in the Rhône, with little human contact. Martial goes to the island, where he finds Balandran, a rough shepherd who served Malicroix, and Dromiols, an oddly hostile notary who has settled Malicroix’s accounts. Dromiols informs Martial that in order to keep the inheritance, he must stay on the island, without leaving, for three months. His ensuing stay makes up the bulk of this novel by Bosco, a writer long revered in his native France and who died in 1976. Bosco was nominated four times for the Nobel Prize in literature; this is widely regarded as his magnum opus. It is a slow and quiet novel given to long descriptions of wind and rain and the Rhône. Bosco never uses one word when, as the saying goes, he could use 20. Martial hasn’t brought so much as a book to occupy himself. He sinks into his solitary thought. “Everything around me was silent,” he says. “Nothing suggests unlimited space like silence. I entered that space. Sounds color an expanse and endow it with a kind of sonorous body.” And so on. After a while, Martial’s dreams become indistinguishable from his waking life. There seem to be other figures on the island: Are they really there, or are they ghosts? Bosco doesn’t provide many hints. Readers partial to philosophical tangents will find much to enjoy here. Others may find themselves stranded.

Bosco’s novel is a work of tremendous lyricism, but his meditations can also grow ponderous.

ROMANTICISM AND ITS DISCONTENTS
by Anita Brookner
Newsletter sign-up