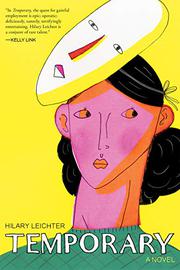 The nameless protagonist of Leichter’s debut leads a temporary existence. “The calls come on Mondays and Fridays, flanking each week with ephemeral placements,” she explains. It's her job to fill in for others, and she takes it seriously; after all, as she read once on a granola bar wrapper, “there is nothing more personal than doing your job.” All people are replaceable, but the jobs must continue. Filling in for the chairman of the board at Major Corp (“the very, very major corporation”), it is her job to sign documents and stamp dates and run meetings and wear fashionable scarves. “Everyone has a parcel of work they don’t want to do themselves, and what can I say? I’m a purveyor of finished parcels,” she says simply. Soon, she leaves the city and her cadre of casual boyfriends—her culinary boyfriend and her tallest boyfriend and her earnest boyfriend, a designated boyfriend for each possible purpose—for a series of increasingly absurd assignments. On a pirate ship, she fills in for someone named Darla, swabbing the decks and cleaning the company buckets, adjusting her temperament to best channel real Darla. But then Darla returns—she was only visiting her grandparents in Florida—and our unnamed protagonist is on to her next transient post, filling in at a small murder business, with logistics. She comes from a long line of temporaries, but still, she hopes it is temporary, being a temporary. The lucky temps ascend to a state of permanence—“the steadiness,” they call it. “My dream job,” she tells her earnest boyfriend, “is a job that stays.” The novel, playful bordering on twee, is not especially subtle in its commentary—a cohesive identity? in this economy?—but it’s clever and strange and, in the end, unexpectedly hopeful, less a biting gig-economy satire than a wistful 21st-century myth.

A dreamy meditation on how we construct who we are.