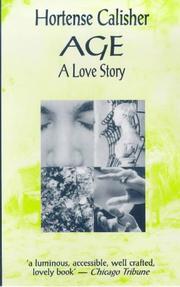 In this brief wry-and-bitters mulling of the nagging, niggling, old-age preoccupations with death and dying, Calisher has reined in her usual frothing diction and dialogue for the even-tempered (but hardly conventional) joint meditation of a witty, much-loving septuagenarian couple. Gemma, 77, is an architect; husband Rupert, 73, is a poet, and they have each decided to add perhaps an "inch of grace" to dying by recording daily accounts of living and thinking in an "almanac"--to be read by the survivor. Old age is scary in minor habit changes--"the sudden cabs, purse fumblings, the sense that one has talked too much. . ." (or not at all). Both have blackouts and blank lapses. Rupert "never dreamed that either of us would begin dying in the mind." The past seeps in--Gemma's first husband, Italian Arturo; two daughters--one doomed and dead, one in Saudi Arabia; Rupert's first wife, Gertrude. And the pair are visited by contemporaries as well--fatuous and successful Sherm ("The grand old countryman of American culture") and dutiful wife Kit (Gemma and Rupert will read later of their double suicide). The visit of forever-onstage Sherm makes them appreciate even more their non-octogenarian neighbor, Mr. Quinn, floating sweetly on hope, and having, to their delight, "an amateur old age." They're called upon to attend Gertrude in her hospice-style dying--a grisly business, but Gertrude's plan to reclaim Rupert, at last, dies with her. The two quarrel fiercely over the need for their almanac: like any "infighting couple. . .two angry sofas shouting True, True across a square of rug." As for old age: "It's like life. A total disease. . .worthy of being spoken of every day." An amusing, acrid and sharp view of the "total disease" of life and death, paced by Calisher's own teasing imagination.
Pub Date: Sept. 25th, 1987
ISBN: 0714530123
Page count: 124pp
Publisher: Weidenfeld & Nicholson
Review Posted Online: March 23rd, 2012
Kirkus Reviews Issue: Aug. 15th, 1987