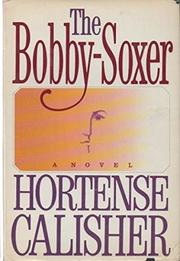 Another jolting, maddening, occasionally exhilarating trip on Calisher's Hovercraft fiction, as again the misty distance between the plot frame and the Meaning-of-It-All offers both dazzlements and headachy obscurations. The scene is a New Jersey town in the 50's and onward, on one of those streets "where the existence of, well, real life could not hope to be concealed," and where a young woman shapes her awakening psyche, as a playwright stirs a nest of family secrets. Craig Towle, the town's famous playwright, is the one who married the "bobby-soxer" half his age (who will later die poisoned by her unborn child). And the female narrator will also have been used by ToMe ("he married our age") as a voice for his creation--a play based on her family's exotic/erotic secrets; the play, never produced, will wither, stillborn. While Towle, the user and abuser, looms offstage, a tangle of family-folk knits and loosens ties, exchanges houses, poses puzzles. Mother, once Towle's lover, inherits money--from Father's mistress? Or had Father a different sexual proclivity? Brother Tim, who spent a boyhood with Grandmother Nessa, is on the periphery of the central mystery. This is rooted in Grandmother's dead sibling Leo--seen as a woman's face in a fading photograph. Artifacts in the present celebrate Leo: an image of two bikes side by side; a wedding dress, offered as a challenge to Nessa by Towle, as he prepares to discard it in a dump. It's Towle who will revive the story of Leo, the man/woman whose strength and tenderness obscured sexual divisions. And it is at her (aborted) wedding, to artist a graveyard, "at the double knot of my own legend." Convoluted and packed with some startling perceptions, as well as those lumpish throwaways ("Sandwiches make me optimistic"; or "What is sex but a question the body answers?"). Still, this lush mix of insights and fictional outtakes is more manageable and tighter than Calisher's previous novels. A wildly uneven talent--but un-ignorable.
Pub Date: March 28th, 1986
ISBN: 0385184263
Page count: 296pp
Publisher: Doubleday
Review Posted Online: March 23rd, 2012
Kirkus Reviews Issue: Feb. 15th, 1986