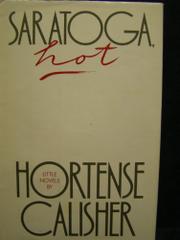 Eight "little novels"--i.e., longish short stories--from the idiosyncratic author of strong short fiction and uneven novels; here, though none of the pieces is quite fully satisfying, the collection is only occasionally mired in the feverish imagery and lumbering verbiage that have seriously marred Calisher's recent work (On Keeping Women, Mysteries of Motion). The novella-length title story is one of the less successful entries, uneasily poised between comedy-of-manners (the Saratoga sporting set) and psychological closeup: the conflict-ridden marriage of bouncy horse-lover Tot and depressive, lame artist Nola--which somehow chugs along despite (or because of) their opposing sensibilities, their heavy loads of guilt. There's a similar, more satiric blend of milieu (upscale show-biz) and neurotic marriage (in the A Star is Born mode) in the brief "The Sound Track." And two other stories offer wildly contrasting views of New York City lifestyle: in the case-history-like "Survival Techniques," the narrator--a retired storekeeper living with his wife in a fine old midtown apartment-house--finds himself compelled to join the bag-ladies on his block ("I was not aiming to be pitiable, only never again to have to be a passerby"); in the fetching but overlong "The Tenth Child," the author reads an ad for a Park Ave. triplex ("Space for 1,000 Dresses and Room for Party for 100 Children")--and is quickly launched into an elaborate fantasy about the sort of family that would live in such a place. The other pieces, however, even if laced with contemporary details, are more personal, less social. "Real Impudence" is a slightly clinical, fairly wry study of eccentric relationships in a Greenwich Village menage. ("It's all a question of knowing who to latch onto.") "The Library" is a faintly soupy retrospective--about a charismatic Englishwoman who has just died, about the three Americans who loved her, becoming a "family of husbands." And the collection is rounded out by two first-person memoirs: a woman recalls her ambivalent feelings about her mother, her own ironic fate ("now I am you"), in "Gargantua"; "The Passenger"--the thoughts of a woman writer en route by train from Chicago to New York--is plainly autobiographical, rather formless, occasionally humorous. . . and often excessive. ("Peoples' agonies are like dunes I stumble in, always falling with my fangs in my own wrist.") Inventive, observant, murky, florid: the familiar mixed bag of Calisher virtues and drawbacks--but without the oppressive longueurs of her recent novels.
Pub Date: May 1st, 1985
ISBN: 0385199759
Publisher: Doubleday
Review Posted Online: March 23rd, 2012
Kirkus Reviews Issue: April 15th, 1985