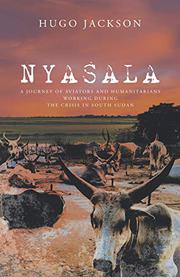 A Journey of Aviators and Humanitarians Working During the Crisis in South Sudan
by Hugo Jackson translated by Susan Katz
BUY NOW FROM
AMAZON
BARNES & NOBLE
LOCAL BOOKSELLER
GET WEEKLY BOOK RECOMMENDATIONS:

In this historical novel set in the South Sudan, a man looks for the young sister he lost during the confusion of the country’s civil war, assisted by a battery of pilots and humanitarian workers.

While her village was being brutally pillaged by soldiers, 3-year-old Nyasala was separated from her family. Fortunately spared from violence, she’s been taken under the care of neighbor Mayen, who does his best to navigate her to safety across lands torn asunder by conflict. He’s a remarkably reliable guide for his age—he’s 18—unsurprising, since he’s worked as a spy for the Sudanese People’s Liberation Army. Much later, Nyasala—now 10 years old—has been adopted by a Murle family; she’s of Nuer extraction, and the Nuers and Murles have long been locked in conflict over cattle, the “most profitable commodity.” Nyasala’s brother, Akol—who was separated from her when soldiers overran their village—learns that she may be living in Pibor, an area so dangerous its humanitarian staff is being evacuated. Debut author Jackson describes a collaborative effort to find her, detailing the roles of medical professionals, pilots, security officials, and nongovernmental organization operatives, as well as the enmeshed presence of “Mama UN.” It is impossible to identify, beyond Nyasala, a protagonist, a refreshingly uncommon literary strategy: First published in Spanish and translated by Katz, the entire novel reveals layer upon layer of bureaucratic entanglement and collegial cooperation among the many agencies, public and private, attempting to save the war-torn country from itself. However, the plot is crammed with too many intersecting narrative lines, and because of the general sloppiness of the writing—or perhaps of the translation—it is nearly impossible to keep them neatly distinct. The author seems to introduce a new character with each page, failing to give enough attention to any one of them to achieve proper development. Jackson is at his best portraying the grim litany of “persecution, rape, and street violence” in South Sudan’s capital city of Juba. However, his prose ranges from haltingly ungrammatical to simply unintelligible, as in sentences like this one: “It was their pride to maintain and controlling the area since their salary’s rarely paid which was another reason to erupt the current conflict in this young nation.”

An ambitious work sabotaged by a confusing plot and awkwardly turbid prose.