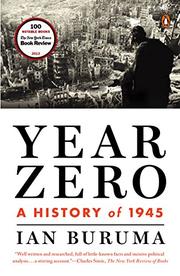 Insightful meditation on the world’s emergence from the wreckage of World War II.

Buruma (Democracy, Human Rights, and Journalism/Bard Coll.; Taming the Gods: Religion and Democracy on Three Continents, 2010, etc.) offers a vivid portrayal of the first steps toward normalcy in human affairs amid the ruins of Europe and Asia. The end of hostilities left landscapes of rubble and eerie silence and an economic collapse that gave rise to countless black markets. There was widespread hunger and misery. Millions were displaced, including Buruma’s grandfather, who was seized by the Nazis, forced to work as a laborer in Berlin and finally reunited with his family after the war. Many of the displaced were afraid to go home, fearful that their homes were gone or that they would be regarded as strangers. Buruma re-creates the emotions of the time: the joy that lipstick brought to emaciated women in Bergen-Belsen; the wild abandon and eroticism of the liberation; and the desire for vengeance, sometimes officially encouraged, as in Russian road signs that said, “Soldier, you are in Germany. Take revenge on the Hitlerites.” By the end of 1945, after years of danger and chaos, most people yearned for a more traditional order to life. They “hungered for the trappings of the New World, however crude, because the Old World had collapsed in such disgrace, not just physically, but culturally, intellectually, spiritually.” Recounting the occupations of Germany and Japan and life in the Allied nations, Buruma finds that the war was a great leveler, eliminating inequalities in Great Britain and rooting out feudal customs and habits in Japan. Despite much longing for a new world under global government, postwar life was shaped not by moral ideals but by the politics of the Cold War.


BEST BOOKS OF 2013 ABOUT AMERICAN HISTORY:

OUR LIVES, OUR FORTUNES, AND OUR SACRED HONOR
by Richard Beeman
Nonfiction