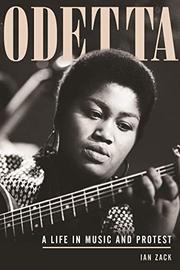 One of the leading voices of the mid-20th-century folk revival receives her biographical due.

In a narrative that is both effectively researched and engagingly readable, Zack (Say No to the Devil: The Life and Musical Genius of Rev. Gary Davis, 2015) is convincing in his argument that Odetta Holmes (1930-2008) has been underappreciated for too long, and he shows how and why her reign as the “Queen of Folk” was over before folk music hit its commercial peak. When folk music, progressive politics, and the civil rights movement were forging a unity of conviction in the 1950s, the young Odetta was clearly the right artist at the right time, with a moral fervor in her powerful lower register that could bring audiences to their knees. She wasn’t threatening in the manner of ex-convict Lead Belly, and she hadn’t suffered the blacklisting taint of Pete Seeger and other more overtly leftist singers. With her regal bearing and impressive vocal talents, Odetta proved inspirational to audiences and fellow artists alike. “When I first heard her…my knees went to jelly,” said Joan Baez, who then rose to fame as younger white performers began to find the commercial success that had eclipsed anything Odetta had achieved—and deserved. Their success made her bitter, and she felt that even her longtime manager, Albert Grossman, had betrayed her. Odetta charged that as the first client managed by the man who would become a legend with a stable including Bob Dylan and Peter, Paul, and Mary, he “built his business on my back and I never benefited from it.” Stronger management might well have nurtured her potential as an actress and helped her to navigate the sea changes of the 1970s through the end of the century, when her performing draw diminished and her recording career stalled. She also battled alcohol addiction and was often branded as difficult offstage. Regardless of her struggles, Zack brings her back into the spotlight.