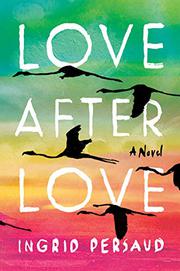 A found family attempts to mend their individual and shared wounds.

This novel by Trinidadian author Persaud (If I Never Went Home, 2013), winner of the 2017 Commonwealth Short Story Prize, explores self-harm, sexuality, trauma, loneliness, and the idea of home. In the opening chapter, Betty, a young mother, is being physically abused by her husband. After his abrupt death pages later, she says: “That man only gave love you could feel. He cuff you down? Honeymoon. He give you a black eye? True love in your tail....He put you in hospital for a week? Love will stay the course. He take the knife and stab your leg? Until death do us part.” Years later, Betty invites her colleague Mr. Chetan to live with her and Solo, her adolescent son, as a platonic lodger. As the three of them get to know each other, they create a stable and loving household. After Mr. Chetan shares his deepest secret with Betty, she decides to confess her own—only to realize Solo has overheard the devastating details. The moment upends their family and changes their lives forever. To put space between himself and his mother, Solo embarks on a trip to New York to stay with his paternal uncle. Back in Trinidad, Betty tries to fix the relationship with her son while also finding herself as an individual. Eventually, Mr. Chetan moves out and attempts to live his truth, which puts him in great danger. As the years pass, the three of them grapple with the literal and figurative distance between them. Broken into three parts, the novel oscillates among the three characters' points of view. Writing in vibrant Trinidadian dialect, Persaud renders her characters with great empathy and care. If the novel’s structure feels a bit uneven (with the second section dragging a bit), the ending gives readers some much-needed relief.