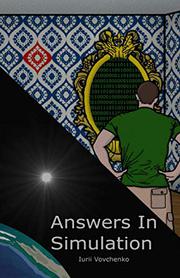 A man’s anguished search for the meaning of life leads to the discovery that it’s all a computer simulation in this debut SF novel.

Vovchenko’s cosmic tale of ideas follows the adventures of Robbie, a 20-something technical writer in Seattle with no clue what he wants other than to play video games and ponder arcane subjects, from the existence of the soul to the mysteries of quantum physics. A seesaw picaresque ensues as he cycles through business careers and reversals, marries, and loses everything when his wife dies in a car crash that leaves their young son blind, deaf, and mute. Grief-stricken, Robbie decides that life is a pointless ordeal of suffering and brutality under a “sadistic God.” But then his speculative science streak kicks in and he brainstorms the notion that “this duality of light being a wave and a particle doesn’t make any sense unless the world is computer-generated.” That epiphany makes the author’s hitherto grounded and realistic narrative blast off into fantasy. Robbie wakes to find his consciousness enmeshed in a robotic body on an airless planet inhabited by other robo-humans and ruled by disembodied beings called Mitras. This is the real world, he is informed, while humans are indeed artificial intelligence programs that live, breed, and evolve in a simulated world running on a Mitra computer. Enlightened human AIs like Robbie are occasionally “extracted” from the simulation to live robotically in the real world and help the Mitras, who are spiritual but not very smart, develop technology. It all checks out, and Robbie and fellow extractee Isaac Newton get entangled in wars between Mitra factions, the rise of an insurgent lizard god, and ethical quandaries in which the survival of the computer simulation and its billions of human AI consciousnesses hangs in the balance.

In its (simulated) earthly phase, Vovchenko’s ruminative yarn is a sometimes-affecting story of a thoughtful young man trying to reconcile the practicalities of life with philosophical and moral principles. The author’s conception of the world as a computer model—the probable randomness of quantum physics is actually a computational shortcut that economizes on technical resources—is intriguing. And while his prose is sometimes awkward and needs a strong editor—“Modern poor seemed to Robbie like pussycats of the real poor of the past”—he manages flights of plangent lyricism. (“His soul was a lonely and dull star flying away from the constellations of other brighter and happier stars,” Robbie reflects during a sojourn in India.) The novel’s phantasmagorical second half is imaginative but less successful. The “real world” of the Mitras feels utterly artificial, as simplistic, contrived, and cartoonish as a computer game yet so uninvolving that Robbie flies away from the Mitra planet and spends years brooding alone in dark, empty space. The narrative often bogs down in long stretches of intellectual bloviating with dubious conclusions. (“Art is completely relative to the viewer and his ability to comprehend an art piece; what” the artist “meant by it; what associations it creates; and if a viewer can appreciate the effort and creativity which went into that art piece. Therefore, art should never be compared.”) Readers may wish Robbie would retreat back into the simulation and stop overthinking things.

A sometimes-thought-provoking, sometimes-talky and sluggish speculation on reality and human nature.