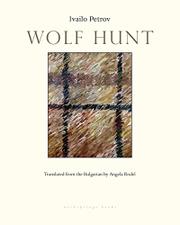 An epic study of one Bulgarian village’s travails during World War II and under Communist rule.

First published in 1986, Petrov’s novel circles around a group of men who, on Christmas Eve 1965, leave a bar to participate in a wolf hunt in a blizzard. The men have known each other for years and generally have reasons to resent each other, so the mix of bad weather, alcohol, and rifles is an ominous combination. But though the excursion has explosive and tragic consequences, Petrov works at a low boil, moving slowly (sometimes very slowly) through the men’s pasts. One has his wedding day ruined when one of the attendees publicly reveals that the bride is not a virgin; others are farmers strong-armed into taking part in a Soviet cooperative that mainly impoverishes them; a tubercular young man struggles to defend the honor of his brother-in-law and father-in-law, who both stand accused of treason. Translator Rodel keeps the prose clear and colloquial, but the avalanche of details about various families and their histories, delivered in lengthy paragraphs, is often dry. However, a central section centered on Ivan, the village artist and troublemaker, has a welcome liveliness: his interference in the marriage of a local couple blends the romance and danger of a love triangle with the political and financial struggles of getting ahead under communism. (The implication being that life under the co-op's strictures is a kind of cuckolding too.) Like most critiques of communism, the mood throughout the novel is melancholy, and the plot is rife with loss and heartbreak. “Everywhere there were wars, poverty and misery, treachery and lies, violence and slavery, joy and happiness,” one narrator intones near the end, which also captures the ratio of gloom to sunshine contained within.