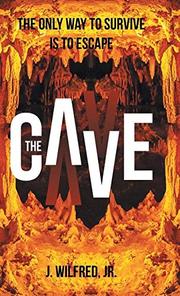 While fishing, Aaron and Evelyn Freeman save a young boy from drowning and carry him home. He doesn't seem capable of speech and is terrified of light. Their parents, Clara and William, lovingly accept him and name him Chris, but shortly thereafter, goblins invade the house and demand to leave with Ilissa, their 11-month-old daughter. According to the goblin in charge, Maruffo, it is their right to bring her to their underworld lair. William defiantly refuses and is killed by the goblins, who then take Ilissa and burn the house down. Clara flees with the remaining three children to Aunt Sarah and Cousin Freddy’s house and reveals a series of shocking truths: she’s not really Aaron and Evelyn’s mother, nor was William their father. She found them when they escaped the underground cave governed by goblins—just as Chris once did—and the couple decided to raise them as their own. Wilfred deftly describes the tug of war between humans and goblins in narrative terms clearly modeled on biblical history, providing vivid details. The goblins are former angels who rebelled against their beneficent creator, Abba, and are now obsessed with destroying mankind. Abba, in order to save humans from bondage, came down to Earth in the form of a slave and sacrificed himself so he could produce a hole in the cave through which humans could escape, an event referred to as the Emancipation. The Brotherhood, a group comprised of former slaves, is the caretaker of written histories much like the Bible. Wilfred meticulously re-creates principal New Testament stories in a way likely to be digestible by young children. He also helpfully includes discussion questions at the conclusion of the book as pedagogical tools for parents (for example, “What would be the best part of adding a new member to your family?”). But some of the plot—there’s a decadelong war between humans and goblins—doesn’t seem all that didactically useful if the overarching point is a first encounter with central Christian ideas.

A valuable instrument for parents who want to teach Christian principles to kids.