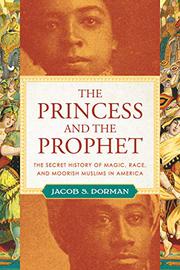 THE PRINCESS AND THE PROPHET

A corrective portrait of an early-20th-century chameleon who became an influential Muslim leader.

In this dense social history, Dorman (History and Core Humanities/Univ. of Nevada; Chosen People: The Rise of American Black Israelite Religions, 2013) takes a largely nonjudgmental view of Noble Drew Ali (1886-1929), the controversial founder of the Moorish Science Temple of America, a forerunner of the Nation of Islam. Despite the author’s evenhanded approach, Ali emerges as a con artist of unusual audacity. In a prodigious feat of detective work, Dorman discovered that Ali was actually the circus magician Walter Brister, who faked his death in 1914 with the help of his wife, Eva, only to reappear years later and establish the Moorish Science Temple in Chicago. Styling himself as the Prophet Noble Drew Ali and Eva as the Grand Sheikess, he claimed to be the reincarnation of Muhammad and preached that black Americans “were in fact Asiatics of Islamic Moorish descent.” He flouted the law repeatedly: He had four wives simultaneously and was arrested for statutory rape, practicing medicine without a license, and the murder of an associate (a charge he beat, possibly by bribing the police). He made enough enemies that his death, officially attributed to tuberculosis and other causes, led some people to suspect he’d been poisoned. Dorman devotes much space to the antecedents of “Moorish Science”—e.g., Freemasonry, the Shriners, and “Orientalist tropes” like harems—which makes for a slow-paced narrative but one with a deep social context. He also finds Ali’s legacy in the fezzes worn by some rappers and in other pop-cultural outcroppings. At the end, he concludes that even if all the allegations about his subject are true, “there was something noble about Noble Drew Ali.” Given that Ali was credibly accused of murder and child rape, the special pleading suggests that the author stumbled into the biographer’s trap of falling in love with a subject who requires the clearer eye he shows elsewhere in the book.

A flawed yet erudite narrative about the founder of a precursor of the Nation of Islam.