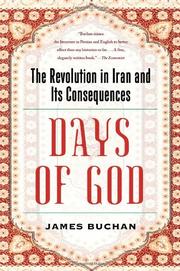 The Revolution in Iran and Its Consequences
by James Buchan
BUY NOW FROM
AMAZON
BARNES & NOBLE
LOCAL BOOKSELLER
GET WEEKLY BOOK RECOMMENDATIONS:

British novelist and journalist Buchan (The Authentic Adam Smith, 2006, etc.) revisits the Iranian revolution for a clarification of the historical record.

A plethora of recent works on Iraq and Afghanistan have given way to a deluge of interest in Iran and what makes this enigmatic empire tick. Buchan, a former foreign correspondent for the Financial Times, provides a helpful primer about the rise and fall of the Pahlavi state, fleshing out in particular the personalities of the autocratic father, Reza, a “former stable lad” who “crowned himself King of Kings” in 1926, and coddled son, Mohammed Reza, who rose to power in 1941 and was hounded into exile by the revolution in 1979. A country deeply embedded in ancient customs and privileges, Iran had known long-running dynasties of Safavids and Qajars, while the Pahlavis, in comparison, would be a flash in the pan, though they galvanized the country to hasty European-inspired modernity. A political lightweight on the world stage, Mohammed Reza was nonetheless tolerated by the British and Americans after World War II as offering “stability” to their oil interests in the region and left in power after the CIA-engineered coup of 1953. Meanwhile, the brilliant seminary student Ruhollah Khomeini swung into political action, challenging the shah’s reforms and ending up in exile in 1963. The shah grew increasingly isolated from real events, spending lavishly on the buildup of his armed forces, and he was emboldened by the death of his chief rival, Egyptian president Gamal Abdel Nasser. Eventually, the revolutionary and religious elements could not be contained by the shah’s forces, and Khomeini became the movement’s spiritual leader. In sprightly prose, Buchan delineates the events that took on a mind of their own and left Iran doomed by its very “intransigence.”

A solid, accessible look at the making of modern Iran.

THE GOLDEN PLOUGH
by James Buchan

FROM PALACE TO PRISON
by Ehsan Naraghi
Nonfiction

A SLIVER OF LIGHT
by Shane Bauer
Nonfiction