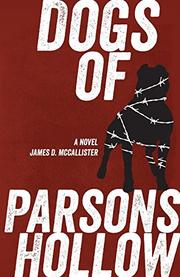 A Southern-fried Rear Window from McCallister (The Year They Cancelled Christmas, 2017, etc.) that focuses on a woman who discovers a dogfighting operation in her backyard.

As the year 2000 approaches, Randi Margrave is looking for a new house, hoping to distract herself from the memory of her recently deceased son, Denny. Her husband, Cullen, a film professor at Southeastern University in Columbia, South Carolina, is initially hesitant to move out of the city, but he acquiesces, and they end up in a pretty hilltop house in rural Edgewater County. The couple’s marriage is further stressed by Cullen’s infidelity, which Randi hasn’t entirely forgotten or forgiven. After the move, Randi spends her days alone attempting to write fiction, but she’s assailed by the mournful wails of dogs from down the hill. As a former reporter and a lover of animals, Randi decides to investigate the source of these noises and quite literally stumbles upon her neighbors’ dog-breeding facility. The Macon brothers—vindictive Esau and simple-minded Julius—run the compound, breeding and training dogs for local fights. After discovering that local authorities are in on the scheme, Randi decides to take matters into her own hands, entering into a dangerous cat-and-mouse game with Esau as she attempts to expose the abuse to the wider world. McCallister does well to slowly build the fictional world around Randi, and there’s a building sense of tension as she discovers more about the Macons; this is counteracted by scenes that focus on Randi’s connection with Julius, whom she secretly befriends as she continues her snooping. The combination effectively gives the plot a feeling of balance. The depictions of some characters are somewhat stereotypical, such as Cullen’s nebbish film professor and Esau’s hypocritical preacher, but McCallister rightly keeps most of his attention on Randi, who receives some real depth of characterization as the story goes on. However, the effect of McCallister’s clipped sentences (“Randi, waiting”; “Solitude, achieved”) gets dulled by repetition over the course of the novel.

An uneven thriller but one with enough momentum to keep the pages turning.

BEYOND THE CABIN
by Dana Ridenour
Fiction