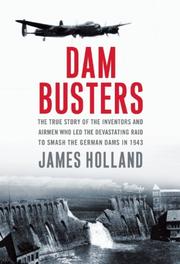 The True Story of the Inventors and Airmen Who Led the Devastating Raid to Smash the German Dams in 1943
by James Holland
Age Range: 1887 - 1979
BUY NOW FROM
AMAZON
BARNES & NOBLE
LOCAL BOOKSELLER
GET WEEKLY BOOK RECOMMENDATIONS:

In May 1943, 19 British heavy bombers flew a dangerous, nighttime mission at treetop level to attack three German dams. It succeeded, and British historian Holland (The Battle of Britain: Five Months that Changed History, 2011) delivers an extremely detailed but never dull account of its tortuous history.

Few military missions stem from the idea of a single man, and a civilian at that, but that’s the case with Barnes Wallis (1887–1979), the assistant chief designer at Vickers Aviation during World War II and a prolific inventor. In 1942, he conceived of a huge bomb dropped from a plane that would skip across the water, over a torpedo net, and strike a heavy target such as a ship or dam. In the book’s first section, Holland recounts Wallis’ efforts to win over military and civilian leaders. In the second section, the author describes a frantic three months of planning, training and construction of the bomb and the plane modifications necessary to deliver it. The raid itself was definitely not anticlimactic. Bombs destroyed two dams, producing disastrous floods over a huge area. Eight bombers were lost; the remaining crew returned as heroes, and the mission remains an icon in British memories of World War II. While the 1955 movie, starring Richard Todd and Michael Redgrave, ended in triumph, the reality was less dramatic. Damage was enormous, although most of the dead were forced laborers and POWs. Conventional bombing would have hindered Germany’s massive repair effort, but none took place, and the dams were operating by September.

Few historians deny that the destruction of the dams gave an immense boost to British morale and inflicted costly damage to the Nazis, and Holland offers a definitive, nuts-and-bolts history.

THE ALLIES STRIKE BACK, 1941-1943
by James Holland
Nonfiction

THE BATTLE OF BRITAIN
by James Holland
Nonfiction

DESTINY IN THE DESERT
by Jonathan Dimbleby
Nonfiction

THE BATTLE OF THE TANKS
by Lloyd Clark
Nonfiction

THE GUNS AT LAST LIGHT
by Rick Atkinson
Newsletter sign-up