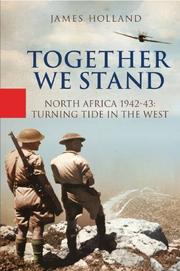 America, Britain & the Forging of an Alliance
by James Holland
BUY NOW FROM
AMAZON
BARNES & NOBLE
GET WEEKLY BOOK RECOMMENDATIONS:

Vigorous account of the war in the North African desert, in which, perhaps improbably, the Allies emerged victorious.

For the first two years of the conflict, Commonwealth and Free French forces fought against Rommel’s Afrika Korps alone. In almost every way, they were the lesser force. As British historian Holland (Fortress Malta, not reviewed) writes, the differences came mostly in military organization. German soldiers were trained, for instance, to act independently, and the lowliest private was expected to be able to take command as the situation required; British soldiers, by contrast, were required to wait for orders on high before taking action. Rommel’s forces were highly mobile and highly coordinated, while the British divisions tended to be unwieldy. And German arms, such as the 88mm cannon and the Mark IV tank, were superior to their British counterparts (“one looks solid, strong and formidable,” Holland writes, “the other lightweight and ineffective”). The American arrival in the African theater roughly coincided with a massive British reorganization of forces with an eye to solving institutional problems; the fall of Tobruk and the German threat to Cairo did much to overcome inertia, as old generals were sacked and new ones such as Bernard Montgomery came on board. At the same time, Sherman tanks and 105mm howitzers began to pour in, finally giving the Allied forces the wherewithal to meet Rommel on equivalent terms and, late in 1942, leading to victory at the Battle of El Alamein, when “Churchill had his victory at last” and the tide began to turn against the Axis. Holland’s narrative is leisurely and anecdotal, drawing on the memories of dozens of players, including the photographer Cecil Beaton and the journalist and author Alan Moorehead—who, contemporary correspondents might note, was openly critical of the biggest single British disadvantage: “Quick-decision men . . . it’s what we lacked most.”

A British rejoinder and worthy complement to Rick Atkinson’s An Army at Dawn (2002).

THE ALLIES STRIKE BACK, 1941-1943
by James Holland
Nonfiction

THE BATTLE OF BRITAIN
by James Holland