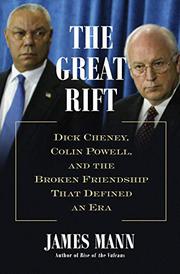 A useful review of the hard-right shift of U.S. foreign policy since the end of the Cold War, delivered via a comparative study of two of the seminal players.

As Mann (George W. Bush, 2015, etc.) shows in this illuminating dual biography and history lesson, early on in their careers, Colin Powell and Dick Cheney both hitched their stars to top government insiders who helped propel them to the highest levels of power. Powell, the amiable, popular soldier, was an aide to both Frank Carlucci and Casper Weinberger at the Defense Department and National Security Council—before becoming national security adviser in 1987. Cheney, “the quiet conservative,” became Donald Rumsfeld’s aide during Gerald Ford’s brief administration before assuming the role of White House chief of staff. Both men, notes the author, achieved stellar appointments during George H.W. Bush’s administration and led a “good war” that expelled Iraq from Kuwait while agreeing, prudently, not to extend the war into Baghdad. Yet it was in George W. Bush’s administration that the two—Cheney as VP, Powell as secretary of state—began to diverge in thinking and action. Cheney’s “blueprint” was essentially to keep the U.S. as the world’s dominant military superpower after the collapse of the Soviet Union and actively “block” any hostile rival. Powell maintained a centrist position and urged caution and restraint, especially regarding another war with Iraq. Cheney pushed for aggressive “antiterrorist measures,” including the controversial and ultimately self-defeating “black sites” and “enhanced interrogation” measures, while Powell emphasized working with U.S. allies. Both men would develop their own “tribes” of followers. Yet, tragically, it was Powell who became the poster child for the invasion of Iraq, duped by U.S. intelligence into making a false casus belli of Iraq’s possession of weapons of mass destruction. The friendship was over, and the split caused deep rifts in the country at large. Still, as Mann demonstrates thoroughly in his insightful dissection of their relationship, Powell was as complicit and eager a participant in the nation’s disastrous ventures as Cheney.

A significant work of American history.

THE OBAMIANS
by James Mann
Nonfiction

THE REBELLION OF RONALD REAGAN
by James Mann
Nonfiction

RISE OF THE VULCANS
by James Mann
Nonfiction