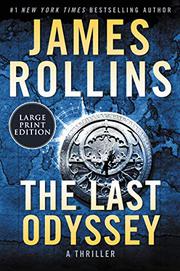 You’re making a mistake if you approach a Rollins novel without suspending every ounce of disbelief that you hold. Otherwise, who would swallow a hook baited with the premise that, by way of the ancient Homeric epics, modern jihadists are on the verge of leveraging the supernatural powers of the underworld, following the footsteps of a shadowy cabal, which, as Pope Leo X tells Leonardo da Vinci—yes, that Leonardo da Vinci—once upon a time “found the entrance to Hell”? It’s up to the good guys of Sigma Force, the secret and highly lethal special-ops division of the Defense Advanced Research Projects Agency, to save the world from such malign possibilities. As always, Cmdr. Gray Pierce and company perform superhuman feats in the service of truth, justice, and the American way, with some sympathetic and highly capable civilian in tow. In this case, it’s a scholar named Elena Cargill, who, apart from holding “dual PhDs in paleoanthropology and archaeology,” is also the daughter of the chair of the U.S. Senate Committee on Foreign Relations, making her an attractive target indeed. As we meet her, Elena is working through an archaeological puzzle: How did the Arabian super-dhow that she’s discovered under hundreds of feet of Greenlandic ice get there? It might just have something to do with a clockwork mechanism that steers interested parties toward the flaming depths of Tartarus and its resident demons, titans, metal mastiffs, and their ilk. You’d think it no place to visit, but it’d be handy to have such tools in one’s kit if one were bent on world conquest. So it is that Elena and the DARPAnauts go up against a nefarious band of terrorists, one a James Bond–worthy giant and the other, this being equal-opportunity evil, a smart and ever so ill-tempered woman who “savor[s] the kill to come” and wreaks an awful lot of damage, as supervillains will. Mayhem ensues.

Improbable and sometimes silly, but Rollins spins an entertaining thriller out of a long string of what-ifs.