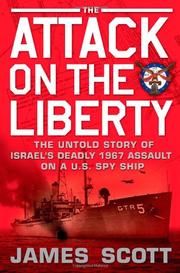 THE ATTACK ON THE LIBERTY

Debut author Scott investigates one of the worst assaults in American history on a Navy vessel not engaged in battle—an intelligence-gathering ship on which the author’s father was an officer.

On June 8, 1967, as the Six-Day War raged, the U.S. Navy backed all its ships off Israel’s coast except for the Liberty, which was 12 miles offshore in international waters. Israeli forces asked the ship to identify itself; the Liberty asked that Israeli forces identify themselves first. Then Israeli torpedo boats and jets attacked the Liberty for a full hour, shooting more than 800 bullets through its hull, blasting a hole in its side with a torpedo, killing 34 sailors and wounding 171. After providing a suspenseful, moment-by-moment portrayal of the siege, gleaned from interviews with survivors, Scott addresses the question of exactly why the assault happened, which is still a matter of dispute. The Israeli government claimed that the brutal attack was simply a tragic mistake; Israeli forces did not see the ship’s American markings and suspected it was Egyptian. After a weeklong Navy investigation, the U.S. government accepted that explanation, though many officials, including Secretary of State Dean Rusk, had doubts. Some suspected that the Israelis knew full well that that the ship was American, but attacked it anyway for unauthorized spying on sensitive communications. Even President Lyndon Johnson confided to a Newsweek reporter that he believed the attack was intentional. Scott makes a strong circumstantial case for this argument, though hard evidence remains elusive and the true story may never be known. The most powerful passages deal with the human cost of the attack—the casualties and the psychological toll on the survivors. The moving closing scene depicts a meeting between the author’s father and one of the Israeli pilots involved in the attack.

Not entirely convincing, but a welcome, fresh look at a still-controversial subject.