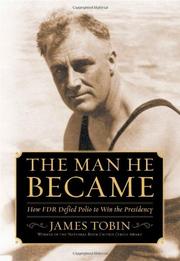 THE MAN HE BECAME

A winner of the National Book Critics Circle Award (Ernie Pyle’s War, 1997) returns with an account of Franklin Roosevelt’s struggles with polio and how they shaped his political career.

Tobin (Journalism/Miami Univ., Ohio; To Conquer the Air: The Wright Brothers and the Great Race for Flight, 2003, etc.) focuses on 1921–1932, the years that frame FDR’s contracting polio and his winning his first presidential election. Throughout, the author emphasizes his thesis: FDR did not win elections in spite of his polio but because of it. Tobin begins with some moments before FDR took his first presidential oath of office in 1933, then he takes us back to the summer of 1921, where he speculates about how FDR contracted the disease. Here—and throughout—Tobin instructs us about the polio virus: how it enters the system (“via specks of human waste”), what it does once it gets there, the varieties of damage it does and the treatments available in the decade of the book’s focus. Tobin does a fine job of showing us how the virus knocked FDR down, how one physician completely misdiagnosed his case, and how FDR dealt with the grievous pain, both physical and psychological. We also meet people who helped in various ways—from his wife, Eleanor, to his aide Louis Howe and several secretaries, physical therapists and physicians. The author also dispels the nonsense that FDR somehow hid his illness from the public (everyone knew: It was continually in the newspapers) and chronicles the long, slow struggle that eventually enabled him to sit, stand and walk (braced and otherwise aided). He used a wheelchair only for short periods and only at home. We see, as well, the evolution of his relationship with his wife and his complicated choreography with fellow New York politician Al Smith.

Medical history, physical and psychological stress, and human ambition are the prominent strands in this rich narrative carpet.


10 WRITERS WHO'VE RESCUED THE MOST CRUELLY NEGLECTED MOMENTS OF HISTORY:

THE HEARTBREAK OF AARON BURR
by H.W. Brands
Nonfiction

THE MAN HE BECAME
by James Tobin
Nonfiction

THE DESTINY OF THE REPUBLIC
by Candice Millard
Nonfiction

TO CONQUER THE AIR
by James Tobin
Nonfiction

Franklin Delano Roosevelt’s recovery from polio was a stirring comeback story in the classic tradition, told on one of the world’s highest stages. Together with the American public’s willingness to disregard or reinterpret the evidence of their eyes, this narrative was pivotal to his political career. In The Man He ...