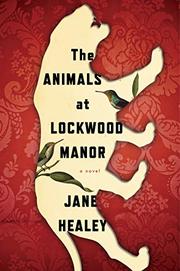 THE ANIMALS AT LOCKWOOD MANOR

Healey looks back fondly at the tradition of spooky English country-house fiction while adding a few twists of her own.

With more than a few nods to Jane Eyre and Rebecca, this debut novel throws an awkward but stalwart heroine into a decaying house with history and mystery to spare. Friendless Hetty Cartright has found a home working among the stuffed specimens at a major natural history museum in London. When, in 1939, the museum decides to farm out its collection to houses in the countryside in order to avoid their destruction in the anticipated bombing of the city, Hetty is assigned to guard the stuffed mammals in their temporary home at Lockwood Manor. The decaying manor, ruled by the imperious and lascivious Lord Lockwood, has “four floors, six flights of stairs, and ninety-two rooms,” some with resident ghosts, and Hetty soon has her hands full attempting to protect the animals, some of which disappear and many of which she finds in disconcerting new spots. Scorned by the household staff, Hetty finds an ally in Lord Lockwood's sensitive, unstable daughter, Lucy, who narrates the portions of the novel that Hetty doesn't. As the two become closer and face their individual fears and insecurities, the peril of the house amps up, culminating in a disastrous party. While Healey sometimes lays on the atmospheric menace with a heavy hand, especially considering how light on action the novel actually is, and though she ties up her plot threads in a few hasty pages, her depictions of the historical period and of the dread of anticipating full-scale war are vivid. The animals, frozen in place and unable to defend themselves either against the encroaching Germans or the more immediate dangers of the live animals and insects that want to devour them, mirror the plight of the women caught in Lockwood Manor.