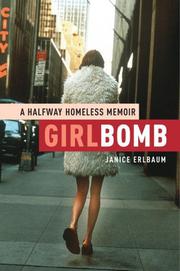 On Nov. 1, 1984, 15-year-old Janice checked into a shelter for young women to escape family abuse. The only white girl there, she was a constant target of harrowing verbal and physical violence. After six months, she moved to a group home run by a sadistically strict matron who seemed to delight in Machiavellian control tactics. Surrounded by a motley crew of colorful castoffs, Janice the Liar (the author does not let herself escape her own cleverly critical tongue) was surrounded by such freaks as Shirley the Nympho and Becky the Baby. Entrenched in the world of the “halfway homeless,” Erlbaum continued to attend high school, an archetypal over-intelligent underachiever who used her smarts in the service of scoring drugs and manipulating authority figures. Bored, insecure, sometimes simply nihilistic, the attractive redhead used her feminine wiles and generous endowment to become the school slut. Finally, at the tail end of a solitary acid trip, she found true love with tattooed Sebastian, a fellow damaged soul. Together, the Sid and Nancy Lite duo acquired (but later kicked) a nasty cocaine habit. Erlbaum writes with gusto and has an excellent sense of pacing. We come to care about her, perhaps because we are never unaware of her weaknesses and flaws. By the end, readers may feel they have relived their own painful, turbulent teen years.

The Success of Failure
by Steve Wilson
Indie

Pieces Of Me
by Josi Marie
Children

We've Been Thinking... and It Works
by Steve Wilson
Nonfiction