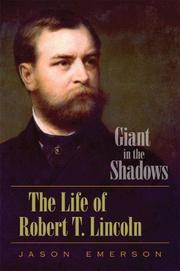 GIANT IN THE SHADOWS

Abraham Lincoln is a seemingly inexhaustible subject for authors and scholars, with some 15,000 books written about him since 1865. This fascination may help explain this new biography of his son, who became a successful attorney, presidential cabinet member, minister to Great Britain and businessman. Emerson has written or edited three previous books on the Lincolns, and he does a thorough job on a relatively minor figure; Lincolniana completists will certainly welcome it. The more mundane facts here—such as the younger Lincoln’s grades at Harvard as the nation headed toward the Civil War—may not engage casual readers, nor will an overlong section detailing Lincoln’s opinions on various biographies of his father. But other subjects are more compelling, such as his complicated relationship with his troubled mother and his committing her to a sanitarium. Also intriguing are the odd coincidences that peppered Lincoln’s life. For example: He was once rescued from being crushed by a train by bystander Edwin Booth, brother of the man who would soon murder his father at Ford’s Theatre; in 1881, while serving as Secretary of War, he was present when President James Garfield was gunned down in Washington, D.C.; in 1901, he arrived at the Pan-American Exposition shortly after President William McKinley was shot there. It bears noting, however, that Robert Lincoln was a rather low-key Victorian gentleman who once said, “My father was a great man, but I am not.” Some readers may wonder whether he would have deemed himself worthy of a comprehensive biography, if he were not the son of arguably the greatest president in American history.

A fine addition to shelves of historians and Lincoln aficionados, though it may lack wider appeal.