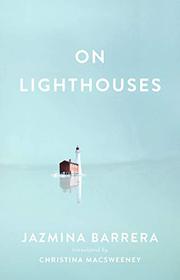 A writer muses on what lighthouses mean to her.

Barrera, a Mexican journalist and editor and co-founder of the Mexico City–based publisher Ediciones Antilope, confesses early on that she’s a collector. “Collecting is a form of escapism,” she writes. After visiting Yaquina Head Lighthouse on the Oregon coast, she wanted “to articulate my feelings about that panorama—the moment and the lighthouse.” There was “something in the lighthouse itself that intrigued me.” Following that trip, she visited a few others and conducted research into their histories and the stories surrounding them: “It was like falling in love; I wanted to know the lighthouse to its very core.” Each story includes a wide array of topics in lighthouse culture, including literature, history, science, art, music, and the daily, brutal lives of the isolated keepers and their families. “From afar, a lighthouse is a ghost, or rather a myth, a symbol,” writes the author. “At close quarters, it is a beautiful building.” Barrera gives close attention to Robert Louis Stevenson’s family: his father, Thomas, instrumental in developing the revolutionary lens that replaced kerosene lamps, and his grandfather, Robert, the first to “construct a lighthouse on a marine rock, far from the coast.” The author is also intrigued that Edgar Allan Poe’s last, unfinished story was about a lighthouse keeper. Barrera chronicles her visit to the Ghoury Lighthouse, built in 1823 after a boat shipwrecked off the Normandy coast, and she comments on the many lighthouses in Edward Hopper’s paintings; he “said that the lighthouse is a solitary individual who stoically confronts the onrush of industrial society.” The author bemoans the fact that GPS and computers may one day make them obsolete. After reading Yukio Mishima’s The Decay of the Angel, about an orphaned boy who works in a signal station, Barrera stopped writing. “There are collections that will always be incomplete, and sometimes it’s better not to continue them.”

THE HOUSE OF THE PAIN OF OTHERS
by Julián Herbert
Fiction

THE STORY OF MY TEETH
by Valeria Luiselli
Nonfiction