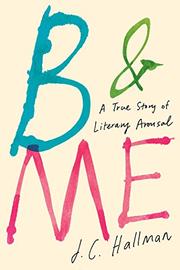 When Hallman (Wm & H’ry: Literature, Love, and the Letters Between William and Henry James, 2013, etc.) first proposed writing a book about Nicholson Baker, emulating Baker’s book about John Updike, U and I, Hallman’s agent was discouraging about its “possible commercial value.” So Hallman fired him and found a new agent who sold the proposal, setting him on a quest to indulge in his passion. Baker writes lustily about sex, giving Hallman a chance to do so, as well, which seems to be his real aim. He ruminates about masturbating, offers clinical details of his lovemaking, describes fondling his girlfriend’s breasts, and excitedly shares information about the frequency and quality of her orgasms, which, he notes, “had become more and more intense, had grown by orders of magnitude, and now, seismically speaking, they were eruptive, volcanic orgasms…of roof joist-shattering intensity.” Other bodily functions (urinating, defecating) and parts (penises, anuses) also merit the author’s consideration. Readers unfamiliar with Baker’s writing may have a difficult time engaging in Hallman’s fixation, his quandary about how to proceed (should he meet him?) and his detailed analysis of his works. Reading Baker, he discovered, “seemed like the perfect tool to use to poke a hole in the dike of my imagination” (phallic imagery abounds throughout), and writing about him was even more inspiring. He felt “a renewed sense of purpose” and saw Baker as his “savior.” When the two finally met, Hallman realized that he was never going to be “a simple friend” to the man he had made his literary subject. “Nicholson Baker need not be a savior for anyone other than me,” Hallman remarks, though he urges readers “to find their Nicholson Baker,” a writer who liberates their imaginations and enriches their worlds.

There are only occasional insights in this frenzied, unabashedly self-indulgent book.

THE DEVIL IS A GENTLEMAN
by J.C. Hallman