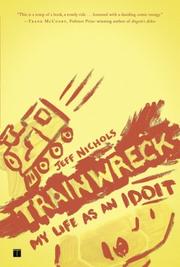 My Life as an Idoit
by Jeff Nichols
BUY NOW FROM
AMAZON
BARNES & NOBLE
LOCAL BOOKSELLER
GET WEEKLY BOOK RECOMMENDATIONS:

Another excessively candid memoir from a stand-up comedian.

As Nichols reached middle age after having failed at just about everything, his feckless life somehow became the focus of an independent film. Despite his well-heeled, WASPy genes, the author is afflicted with a speech impediment, ADD, dyslexia and a mild case of Tourette’s. A slob with poor hygiene, he stutters and is fearful of New Balance shoes. Dysfunction is his shtick. He’s botched virtually every endeavor since boarding school and college, during which he concentrated solely on alcohol, various drugs and misbehavior. After a disastrous bike tour through Europe, Nichols landed on Wall Street, where he lasted for one year. A slew of odd jobs followed, including house painting, a stab at dictionary sales and, mostly, substitute teaching to supplement the college and club bookings. The lonesome loser sank a yacht and burned down his family’s lake house. He spent a lot of time at Alcoholics Anonymous meetings, which he attended to meet women and push his stand-up career. These days the author abstains from booze and blow, but he notes that he “put down the drink and instantly picked up sugar, coffee, and cigarettes—all okay and sanctioned within the confines of society.” He’s got a girl and a license as a fishing-boat captain. Comically, Nichols focuses on bodily conditions and emissions. Like many contemporary stand-up comics, the material is simply sullied shock talk masquerading as whimsical banter. Despite avowals that it’s all quite funny, the story of how one 40-year-old juvenile became a better person is really just indecorous solipsism.

Life as a loser makes wan humor. Wait for the movie.