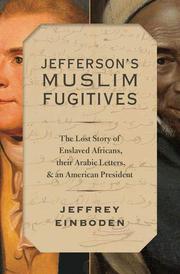 A history of two documents written in Arabic by enslaved Muslims that came to the attention of Thomas Jefferson in 1807.

Einboden, who has vast experience recovering and translating Arabic slave writings, sets the story of these brief missives against the intricate history of Muslim interactions with the nascent republic and, especially, Jefferson. The author begins with a brief vignette that receives great elaboration in later chapters: In 1807, two men who spoke no English were captured as suspected runaway slaves in rural Kentucky. They seemed unusual to their captors and were also literate, but only in Arabic, an all-but-unknown language in the early U.S. An eccentric traveler, convinced that these men needed to be freed, carried two pages of their Arabic writings to Washington, D.C., presenting them directly to Jefferson. Jefferson’s attempts to have the writings translated make for an interesting story, but the larger tale is that of America’s early interactions with the Muslim world. Beginning with the plight of an American captive in Africa while Jefferson was an envoy to Paris and moving on to the conflicts with Barbary pirates, Einboden shares this complex diplomatic history with an emphasis on the language barrier that further separated America from the Arabic-speaking world. The author highlights many scholars and leaders who were at the vanguard of breaking this language barrier, including Yale’s Ezra Stiles and the University of Pennsylvania’s Robert Patterson, who “was not only a professor of mathematics and inventor of ciphers, but also an anti-slavery activist.” Further, Einboden weaves in the political scandals of the day—e.g., Aaron Burr’s arrest for treason—and, finally, Jefferson’s progressive views on religious freedom. Worthwhile and even fascinating as a history, the book nevertheless suffers from a repetitive, awkward style, as the author consistently rehashes his points and repeats many ideas and even phrases throughout the book. Though he may be attempting to build suspense, it becomes tiresome by the end.

An intriguing history in need of further editing.

JEFFERSON
by John B. Boles
Nonfiction

NO PROPERTY IN MAN
by Sean Wilentz
Indie