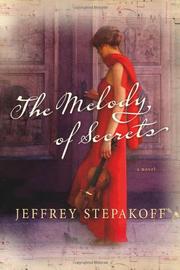 THE MELODY OF SECRETS

Huntsville, Ala., circa 1957, was an interesting place. In the heart of the segregated South, it was beginning to hear the rumbles of the civil rights movement. It was also home to a unique aerospace program, one manned almost exclusively by former German SS officers. At the close of World War II, there was a race to capture the famed Nazi rocket scientists—both the U.S. and the Soviets wanted them. Under their leader, Wernher Von Braun, the group went to the U.S. with all their secrets, and the U.S. government sanitized their past. Twelve years later, in Huntsville, the space race is on—the Soviets have launched Sputnik and now the Germans are to help launch the United States’ own rocket satellite into space. Maria Reinhardt is contributing in her own way: An accomplished violinist, she and some friends have founded a local symphony. With her 12-year-old son Peter away at school and her husband, Hans, working in the lab, she has ample opportunity to revisit her past, which included American pilot James Cooper. Their brief end-of-war affair was unforgettable, but when the Allied forces came, Maria left with Hans (her older second cousin) rather than wait for James and risk capture by the Soviets. At the symphony’s first recital, she spots James Cooper, in Huntsville as a test pilot. What prevents Maria from running away with James is her belief that Hans is a good man. But is he? Her friend Sabine makes a chilling discovery: Her own husband has hidden a chest of gold—in the form of wedding bands and gold fillings—in their bomb shelter. What about Hans? Did he know his munitions lab was attached to a notorious labor camp? If she finds out the wretched truth, will she run away with James?

Stepakoff uses this sliver of history well, but the romance between Maria and James seems irrelevant (and frankly less interesting than Maria’s moral dilemmas), which is a bad sign for a romantic novel.

THE PIECES WE KEEP
by Kristina McMorris
Fiction

A PLACE WE KNEW WELL
by Susan Carol McCarthy
Fiction