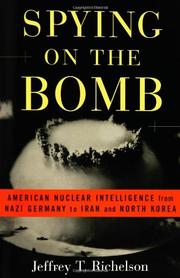 SPYING ON THE BOMB

Bloodless if thorough account of U.S. efforts to find out what its peers in the nuclear arena have been up to over the last half-century.

George Bush has reason to be unhappy with North Korea, whose foreign ministry branded him “half-baked” and a “philistine,” and with the intelligence community that took so long to find out whether North Korea had The Bomb. It does, at least “a small number of warheads,” avers National Security Archive fellow Richelson (A Century of Spies, 1995, etc.). Two lessons emerge from his narrative. The first is that it is difficult to gather reliable nuclear intelligence; though the CIA and other agencies have many tools and strategies available to them, from spies to high-flying satellites, it is a challenge to chart the activities of nuclear aspirants who understandably don’t want those activities to be known. Thus, while it was our good fortune that the Nazis never quite caught on to the existence of the Manhattan Project, it was also a matter of luck that U.S. agents found European sources willing and able to tell them what the Nazi scientists had developed in their secret labs. It is no surprise, then, that, despite “the almost $30 billion that the United States spent each year on its large array of intelligence agencies, analysts, and collection systems,” a major test by India in 1996 went unnoticed—though not by Pakistan, which nearly went to war over it and which shortly afterward conducted a nuclear test of its own. The second lesson, a corollary to the first, is that much of the interpretation of gathered data has itself been unreliable, as demonstrated by the U.S.’s WMD embarrassment in Iraq. Still, Richelson suggests, there was plenty reason to think that Saddam Hussein’s regime aspired to develop nuclear weapons, even if it was incapable of doing so. Though somewhat clinical and academic, Richelson’s text is certainly full of tense and suspenseful turns.

A CENTURY OF SPIES
by Jeffrey T. Richelson

SPIES IN THE CONGO
by Susan Williams
Newsletter sign-up