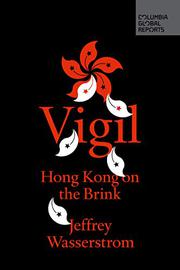 A longtime observer of Hong Kong protest movements argues that the autonomy of the region is being eroded by Beijing authority—not gradually and probably irreparably.

In this well-organized, strikingly relevant work, Wasserstrom (History/Univ. of California, Irvine; Chinese Characters: Profiles of Fast-Changing Lives in a Fast-Changing Land, 2012, etc.) argues that the designation of Hong Kong by China and Britain in the handover of 1997 as a Special Administrative Region enjoying “a high degree of autonomy” is being threatened. While originally the Western assumption was that Hong Kong, as the region bringing much of the economic boom to China, would be too valuable to Beijing to disrupt by its repressive measures, the reality seems to be that Beijing’s tentacles are pervasive and continue to tighten. Disappearances of protestors, forced confessions, the threat of extradition law, the installation of puppet legislators, the resistance to universal suffrage—these are just a few of the familiar “screws” that mainland officials are implementing. The author provides a penetrating review of the situation through on-the-ground reporting and interviews with protest leaders like Joshua Wong and Chris Patten, the last British governor of Hong Kong. Wasserstrom works through the history of the region as a British colonial hub of trade in the mid-1800s and its subsequent enormous economic growth, overtaking even Shanghai after World War II. “Shanghai, after falling in 1949,” writes the author, “was an example of a Golden Goose that the Communists killed not long after taking control of it.” While there have been many victories for the democratic movement since renewed protests this year—e.g., pushing back against a new “moral and national education plan,” which smacked of censorship—the protest movement’s other demands—directly electing the chief executive, the release of prisoners, investigation of police brutality, and immediate universal suffrage, among them—have not been met. Without civil disobedience and international pressure, Wasserstrom fears that Hong Kong will become a “captive colony of Beijing.”

A passionate, important study of the current affairs of a volatile region.