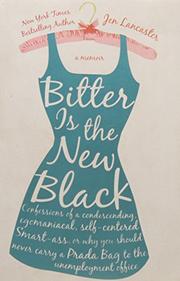 BITTER IS THE NEW BLACK

Confessions of a Condescending, Egomaniacal, Self-Centered Smart-Ass, or Why You Should Never Carry a Prada Bag to the Unemployment Office
by Jen Lancaster
BUY NOW FROM
AMAZON
BARNES & NOBLE
GET WEEKLY BOOK RECOMMENDATIONS:

Carrie Bradshaw meets Barbara Ehrenreich in this memoir about white-collar unemployment after the dot-com bubble burst.

Jen Lancaster was bratty but hardworking: She put in 60 hours a week at her corporate job and enjoyed blowing her paycheck on a Chicago penthouse and pricey shoes. But after a company merger, she was let go with one week’s salary as her severance pay. Lancaster’s layoff came in the midst of the 2001 economic downturn. At first, she was cushioned by her live-in beau’s earnings; in fact, Fletch and Jen went ahead and tied the knot, crassly reasoning that they would receive a lot of green wedding gifts. Then hubby got fired too, and the newlyweds spiraled downward. Eventually, their car was repossessed, and Fletch stopped taking his anti-depressants because he could no longer afford them. Lancaster kept up her spirits by volunteering at an animal shelter, and, of course, starting a blog. So it’s no surprise that she proves to be the type of writer who resorts to FREQUENT CAPS, italics and eye-rolling exclamations: “Are you trying to tell me that . . . I, the bride, am not allowed to JOIN THE REST OF MY WEDDING PARTY?” All the component parts of chick-lit are here: to-do lists (“Find a job! Lose weight”), transcriptions of instant-message conversations and email exchanges—indeed, the emails from the still-employed Jen to her friend Melissa, in which Jen repeatedly has to cancel social plans because of work commitments, could have come straight from the pages of Allison Pearson’s novel I Don’t Know How She Does It (2002). All’s well that ends well, however. Jen snags a book contract and realizes that “[my] values have changed completely. . . . I could care less about Dior’s newest line of lip gloss.”

I REGRET NOTHING
by Jen Lancaster
Fiction