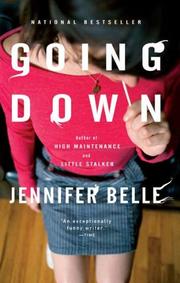  A pleasing frolic on dangerous ground, this debut from Belle features a ditzy NYU coed's yearlong misadventures as a novice hooker, spiraling downward while she imagines herself on the road to better things. Abandoned by her professor daddy so that he can make a life with his new wife, shunned by a thieving roommate for her lack of enthusiasm over his spoils, Bennington Bloom is lovely but homeless as her 19th birthday nears. On a whim, she contacts an escort service and is hired on the spot, beginning her hands-on education as a working girl. Busy enough to take her mind off her troubles, she buys expensive treats while trying to save enough for tuition, but when the owner of the service becomes paranoid and dumps her, Bennington turns to a brothel. Having to juggle her clients at Blanche's, acting classes, more roommate problems, and ongoing parental neglect, she seeks counseling, but because her therapist is 80 and partly deaf, the two can't communicate. Bennington barely escapes from a raid at Blanche's, then leaves when management wants to tax her earnings. An encounter with a painter friend (who has filled an East Village church with images of her, as a saint, as Mary Magdalen, even as one of the wise men) takes her to Martha's Vineyard for much needed R&R she meets the hunk Adam on a whale- watching cruise and before long has moved into his Manhattan apartment. Telling him she does catering, Bennington goes back to work, but in time her man learns her true calling and dumps her, too. She searches the city for love, wandering the streets in a paralyzing snowstorm, until she finds new hope on a nearly abandoned subway platform. Though finely detailed, and appealing in its madcap manner, this flurried portrait of city hustles and heartbreaks offers only a limited, eviscerated view of the perils of a life on the make.