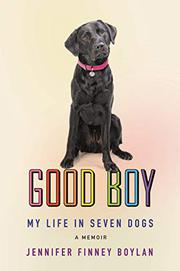 A memoir told through the lens of seven canine companions.

Often, it’s difficult to remember all the details of our lives and the people we once were. “But I remember the dogs,” writes New York Times columnist and LGBTQ activist Boylan, who is on the PEN America board of trustees and serves as the inaugural Anna Quindlen writer in residence at Barnard College. In her latest, the author ties each of the seven chapters to a phase of her life and a dog she has loved. The narrative is somewhat chronological, but the dog stories and timelines also skip around a lot, which occasionally becomes disorienting. As in her previous books, Boylan's wry wit, wicked sense of humor, and unique way of turning phrases shine through, and her candor is powerfully therapeutic. Particularly stunning is the section in which she describes her initial reactions when a close family member also came out as trans. However, this book is not a Boylan primer. Readers who have not encountered She’s Not There (2003), her memoir about her transition from male to female, may long for more detail in this book; the author sometimes skims over major life events she has written about elsewhere. But this is about the dogs, and the canine theme emerged from a Times opinion column, in which she wrote about her dog Indigo, that went viral in 2017. Boylan’s stories about each dog—from Playboy to Sausage to Matt the Mutt to Ranger (whose frequent interactions with porcupines “never ended well”)—range from sidesplitting to downright profound, and the author makes a convincing argument for the inherent need for all creatures to be who they truly are. Though the connections between the dogs and Boylan’s life aren’t always obvious, these tales will entertain, endear, and—fair warning—possibly induce a sudden urge to drive to the local animal shelter.

Intimate and insightful glimpses into Boylan’s life and the dogs that have helped her learn more about love.

STUCK IN THE MIDDLE WITH YOU
by Jennifer Finney Boylan
Nonfiction

I’M LOOKING THROUGH YOU
by Jennifer Finney Boylan
Nonfiction

SHE’S NOT THERE
by Jennifer Finney Boylan

STUCK IN THE MIDDLE WITH YOU
by Jennifer Finney Boylan
Nonfiction

THE SECRETS OF MY LIFE
by Caitlyn Jenner
Newsletter sign-up