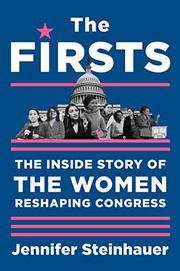 The Inside Story of the Women Reshaping Congress
by Jennifer Steinhauer
BUY NOW FROM
AMAZON
BARNES & NOBLE
LOCAL BOOKSELLER
GET WEEKLY BOOK RECOMMENDATIONS:

The 2018 electoral cycle was a good one for women—well, at least some women, as New York Times reporter Steinhauer shows.

In the wake of the “blue wave” anti-Trump backlash of 2018, the largest number of women ever elected to Congress took the oath of office. Some of them have since become household names—e.g., Rashida Tlaib, a daughter of Palestinian immigrants who set off shock waves when she pledged about Trump that she was going to “impeach the motherfucker,” forcing an issue that the Democratic leadership had been trying to keep under wraps. The class of 2018 found 106 women in the House and 25 in the Senate, and of the 35 newcomers that year, all but one was a Democrat. As for the Republican women, Steinhauer writes, “their numbers in the House fell from twenty-three to thirteen, the biggest percentage drop ever and the lowest number overall in a generation.” There are numerous reasons for that fall, she ventures, including both revulsion among women for the sitting president and the lack of an effort among Republicans to recruit women to their cause. Instead, the Capitol now includes women such as Kyrsten Sinema, who immediately tested the Senate’s dress code by wearing a sleeveless outfit instead of the usual business suit. That example seems trivial compared to the weightier intentions of the incoming class, who, by Steinhauer’s reckoning, were fueled by Trump to run for Congress just as other Americans rushed to enlist in the service following 9/11, “as part of a larger national emergency response.” The analogy won’t please the likes of Joni Ernst and Martha McSally, but the larger point is that women hitherto excluded from the system—Arab Americans from Michigan, Native Americans from Kansas and New Mexico, African Americans and Latinas and members of other underserved populations—are now actively involved and pressing for accelerated reforms, to say nothing of the chance to influence the entrenched leadership.

A fine lesson in civics and political journalism and must reading for anyone contemplating working in electoral politics.