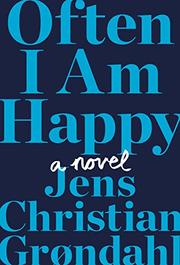 OFTEN I AM HAPPY

A simple, melancholic tale of love, loss, grief, and friendship.

As for many artists before him—Shakespeare, Austen, Bergman—for veteran Danish author Grøndahl (An Altered Light, 2005, etc.), everything seems to come down to love, marriage, and family. This short, wistful novel, the first to be translated into English by Grøndahl himself, takes on those classic subjects through the person of Ellinor, a 70-year-old Copenhagen woman. The book’s title is from a poem by the Danish poet B.S. Ingemann: “Often I am happy and yet I want to cry.” Ellinor’s first words to us are: “Now your husband is also dead, Anna. Your husband, our husband.” Ellinor’s husband, Georg, died three weeks ago, and she feels the need to talk to someone. She picks Anna, Georg’s late first wife and her own best friend, and talks to her via a dramatic monologue which is like a long letter: “His absence felt like a lump growing inside me, making me suffocate. I never felt so alone.” She now has a companion who will listen, but “you have no ears to hear any of this.” She knows it’s “absurd” but she’s lonely, grief-stricken, and it helps comfort her. The plot is very spare. Her first husband, Henning, died 40 years ago in a skiing accident which also killed Anna. Some secrets are revealed. We learn from Ellinor that Henning had been having an affair with Anna. Ellinor then became like a stepmother to Anna’s twin sons, Stefan and Morten, and helped Georg raise them. Eventually, she and Georg married. We learn that Ellinor was an only child from an affair her mother had with a German soldier; she never knew her father. Ellinor is a meek, reserved woman living a simple life. She can get angry, bitter, and sarcastic, and this helps make her seem human as she gradually reveals herself to be a strong, courageous woman.

Although the book is a tad sentimental, it possesses quiet grace.

OUT STEALING HORSES
by Per Petterson
Fiction