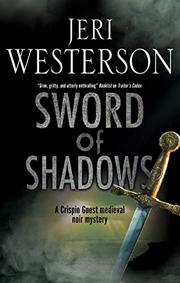 In 1396, a famous tracker of men and objects leaves London for the wilds of Cornwall in search of a fabulous treasure.

Crispin Guest and his apprentice, Jack Tucker (Traitor’s Codex, 2019, etc.), meet by chance with Carantok Teague, a Cornishman who offers them a large sum to help him track down the mythical Excalibur. Although neither is convinced the sword exists, they leave immediately on the long trip to Treknow, the closest village to Tintagel. Since Crispin, a disgraced but honorable former knight, refuses to participate in illegal treasure hunting, it’s fortunate that Teague has an old letter from King Edward III allowing him to search for treasure. A group of traveling players they encounter includes Kat Pyke, a former lover, burglar, and swindler who’s bested Crispin in the past. Crispin also meets the scholarly Marzhin Gwyls, a caretaker at Tintagel Castle, a crumpled ruin guarded by a few men at arms and a constable. On their first visit, Teague moves the heavy stone over the hole where he stores some of his treasures only to find the body of a man at arms. The castle constable asks Crispin to find Roger Bennet’s killer. The castle is barely guarded, and Bennet had a reputation as a womanizer who had earned the enmity of many a maiden. While Crispin investigates the murder, Jack helps Teague search for the sword, and Kat, always interested in items of value, seduces Crispin, who should know better. Among the suspects are the villagers, Bennet’s fellows at Tintagel, and hostile pagans living nearby. Teague, it turns out, does indeed have a nose for treasure, and the search looks to be successful if they’re not all killed off by the mysterious person who’s killed another man at arms and left Kat to take the blame.

History, mythology, and mystery mix in a rollicking adventure that offers a fresh perspective on the famous Arthurian legend.

THE SILENCE OF STONES
by Jeri Westerson
Mystery

SHADOW OF THE ALCHEMIST
by Jeri Westerson
Newsletter sign-up